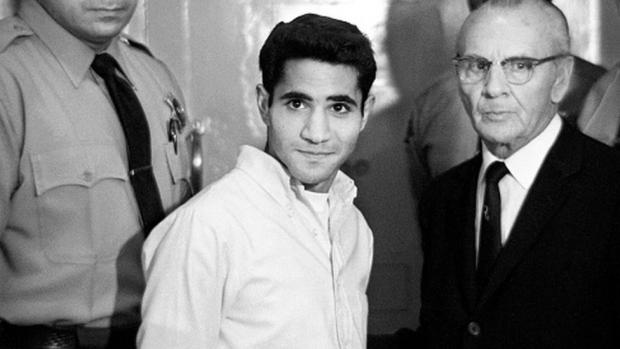 The man who assassinated Sen. Robert F. Kennedy in 1968 could be released on parole Friday after prosecutors said they won't oppose his parole petition.

Sirhan B. Sirhan, now 77, has spent the last 53 years in a San Diego prison and is scheduled to stand in front of a California parole board for the 16th time on Friday.

His last parole hearing was in February 2016.

He was originally sentenced to death, but California briefly outlawed capital punishment and his sentence was reduced to life in prison, with that loophole also giving him the chance to seek freedom.

Robert Kennedy Jr. is supporting Sirhan's bid for freedom because he does not believe he is the man who killed his father.

In 2018, he visited Sirhan in prison and told him he did not think he was responsible for the shooting.

Sirhan confessed to the killing immediately after it happened in Los Angeles in 1968 but he has maintained for years that he has no memory of it.

Robert Kennedy Jr. said in 2018 that he believes someone else killed his father, and that Sirhan was set up to take the blame for it. He wants the case to be reopened.

LA County District Attorney George Gascon hasn't indicated whether or not he will reopen the case and it's unclear if Sirhan plans to file an appeal.