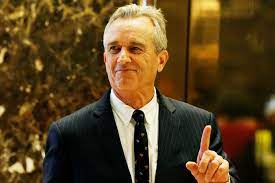 This isn't simply "setting the record straight" on what went down. The latest official figures on autism? 1 in 54 American children are autistic. So we are talking about the MASSIVE destruction of life, and the ongoing internal destruction of the country.

Investigating and detailing the role vaccines play in this horrific reality should be the highest priority.

Robert Kennedy, in the video interview, explains that shortly after Trump was elected in November of 2016, the new president contacted him (Kennedy) and invited him for a meeting at Trump Tower in New York.

During the two-hour sit-down with Trump, Kennedy explained that a comprehensive investigation of vaccines could be done without any heavy lifting by government. There was a well-known Vaccine Safety Datalink which, when opened, would give independent researchers access to a vast trove of US medical records. From those records, a convincing case could be made about vaccine safety/dangers.

Trump gave Kennedy the green light to move ahead.

However, roadblocks then appeared.