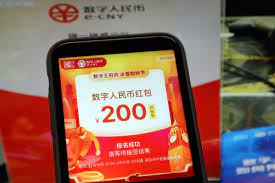 In April 2020 a grainy screenshot of China's sovereign digital currency, DCEP (short for Digital Currency/Electronic Payments) or the Digital Chinese Yuan (DCNY), was leaked online. The image showed a wallet for the DCNY provided by the Agricultural Bank of China, with payment functions, QR codes, and the ability to tap phones together to pay offline. While the People's Bank of China (PBOC) had started researching digital currencies as early as 2014, the screenshot was the clearest indication of how far along in the process they were.

Soon after, pilot programmes were rolled out in a few major cities. In Suzhou, the DCNY was used to pay half of the travel subsidies owed to public servants. In October 2020, more than 47,000 people in the Luohu district of Shenzhen spent 8.8 million yuan (£986,000) during a week-long trial of the digital currency. A total of 1.9 million applicants had signed up to receive one of 50,000 digital freebies – or "red envelopes" – from the government. These packets were each worth 200rmb (£22). During the trial, over 62,000 transactions were made. By May 2020, China had already filed more than 120 patent applications for its official digital currency, more than any other country. In Xiong'an, a new urban centre near Beijing, 19 companies, including foreign brands like McDonald's, Starbucks, and Subway were invited as participants to test the DCNY. As of July 2021, trial users have created more than 20 million digital yuan wallets and executed over £3.6 billion worth of transactions with the new CBDC.