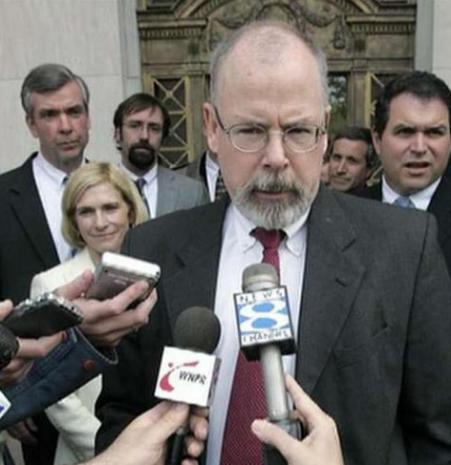 The implications of the grand jury - and the eventual report - have rattled folks in the Beltway this week... for good reason.

This week Texas Rangers infielder Brock Holt became a baseball legend when he went to the mound and threw an "eephus," a high-arching, off-speed pitch, in a game against the Athletics. It is believed to be the slowest pitch recorded in MLB history, and A's batter Josh Harrison stood in disbelief as the 31 mph pitch was called a strike. Harrison just laughed in amazement.

Pirates outfielder Maurice Van Robays coined the term in the 1946 All-Star Game, explaining, "Eephus ain't nothing, and that's a nothing pitch." But as Holt demonstrated, sometimes a "nothing" slow pitch can amount to a great deal.

That is equally true about the occasional criminal eephus that takes everyone by surprise. For example, U.S. Attorney John Durham's investigation has been slow in coming, but on Friday, a report surfaced that he is pitching evidence to a grand jury in an investigation started back in May 2019. The Durham investigation is now longer in duration than former special counsel Robert Mueller's investigation, and many people long forgot that Durham — made a special counsel at the end of the Trump administration — was even still in the game.

The report in The Wall Street Journal said Durham is presenting evidence against FBI agents and possibly others in the use of false information or tips at the start of the Russia investigation in 2016. Those "others" could include a virtual who's who of Washington politics, and even if they are not indicted, Durham could implicate some of the most powerful figures in politics in his final report, expected in the coming months.

Even for those of us who followed and wrote on the Russia investigation for five years, much has been revealed in the last year.