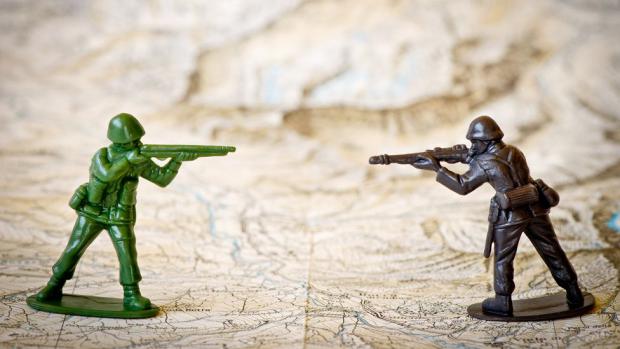 According to David Halberstam, when Washington was considering escalating its presence in Vietnam, a wargame was held to test options. More bombing aircraft were put into airfields in Vietnam; Red attacked the airfields. Blue brought in more troops to guard the airfields; Red started attacking the supply lines for those troops (Note: by tradition, going back to the first Prussian Kriegsspiel, your side is "Blue", the other side is "Red". Soviets did it the other way round.). More troops to guard the supply lines; more attacks on their support systems. And so on: everything the American side thought up was quickly and easily countered by the Vietnam team. The results were ignored: only a game, not really real.

Forward to 2002 and a very large and complicated exercise simulating a US attack on – not named, but obviously – Iran. The retired USMC general playing Red – a no-nonsense experienced soldier who didn't believe technology was the answer to everything (especially the projected wonders that the wargame granted to the American side), scorned business-school buzzwords like "network-centric" – thought outside the box and used low-tech weaponry. When the US high-tech took out his communications, as he knew they would, he went silent – his communications were by motorcycle dispatch riders, coded messages in Friday prayers and similar old-school techniques. He fired more missiles that the Blue side could handle and sank most of the invasion force and finished off the rest with swarms of small boats.

"The whole thing was over in five, maybe ten minutes". The invasion force was brought back to life, the rules were modified to reduce the defenders' abilities – the Red force commander was on the point of destroying the reconstituted landing forces – and the US side "won". He walked out when he decided that the game was too rigged for him to bother doing anything; as he said in a report: "this whole thing was prostituted; it was a sham intended to prove what they wanted to prove."