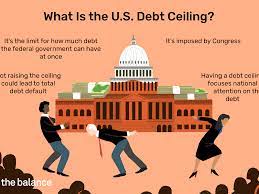 In an editorial entitled, "The Federal Debt Limit Drama Isn't a Fight Over Spending," the Times says that since Joe Biden is now president, the Republicans will bring "renewed drama about the federal debt limit."

What nonsense! Is the Times editorial board that innocent and naive? Republicans have always caved when it comes to the debt ceiling. And they are going to cave this time as well.

But there is no doubt that the right thing to do would be to enforce the debt ceiling by refusing to permit U.S. officials to exceed it. What better way to limit the federal government's spending proclivities than by forcing it to live within its means — i.e, by not running up more debt on taxpayers' credit card?

The Times points out that Republicans could have cut spending when Trump was president. That's true. But they didn't. As everyone knows, Republicans are as big spenders as Democrats are.

According to usdebtclock.org, the amount of federal debt today exceeds $28.6 trillion. That amounts to $227,000 per taxpayer. That doesn't include the so-called unfunded liabilities, such as Social Security and Medicare. The American people are on the hook for a lot of money. And it just keeps getting worse, month after month, year after year.