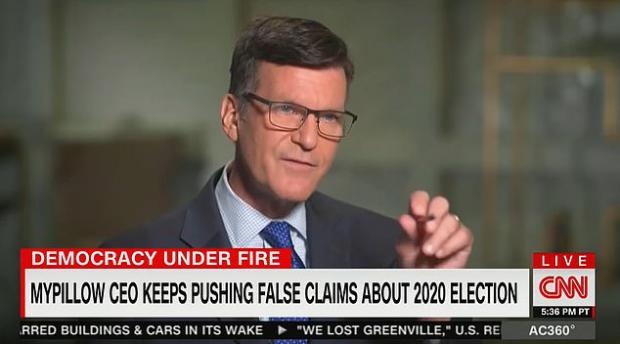 In the interview, fragments of which were aired on AC360 Thursday night, My Pillow CEO Mike Lindell doubled down on claims that votes that were cast for former President Donald Trump were switched to votes for Joe Biden - claims that have been repeatedly refuted.

Lindell has previously been sued by a voting machine producer, Dominion Voting Systems, for his unfounded claims - but now he says he has proof, without offering any specifics.

'They did it in all the states,' Lindell, 60, claimed in the beginning of the segment, to which CNN investigative reporter Drew Griffin responds: 'And you have the proof that would show the actual change of votes?'

But in a voice over, Griffin says: 'It is, of course, complete nonsense.'

He notes that 'every piece of so-called evidence' that Lindell presented failed to prove any hacking or fraud was committed, and said that one piece of 'evidence' Lindell submitted to CNN were just images of pictures of data scrolling on a screen that he says does not prove anything.

'It doesn't show any specific actions of any kind, election-related or not,' Griffin explains to Lindell, adding that a cyber expert said it's 'proof of nothing.'

Author: The Media's Agenda is Not to Mislead People, But to Demoralize Them