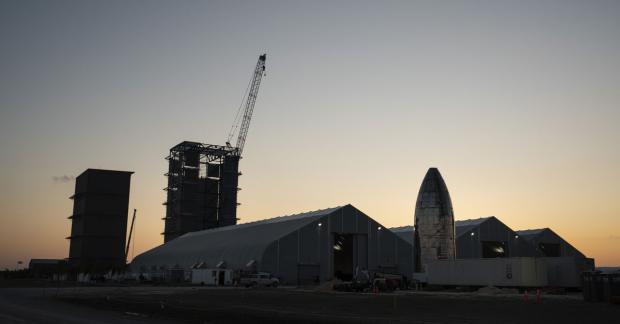 Elon Musk has turned tour guide in a new video showing off the SpaceX Starbase factory in Texas as it prepares to launch the 230ft Starship Super Heavy rocket.

Speaking to Everyday Astronaut, a spaceflight news service, Musk talked about the preparations required to send the giant Starship rocket on its first orbital test flight.

Work is currently underway at Starbase to build up the Super Heavy booster, including installing 29 Raptor engines near the Texas village of Boca Chica.

The firm rolled out the 230ft Super Heavy, known as Booster 4, from its facility a few miles down the road, and will soon subject it to pressurisation and engines tests.

When they are all complete and the engineering team are happy, it is hoped the first orbital launch attempt of Starship will happen, sometime in the next few months.

In the video, Musk talked about the need to keep margins low, and other aspects that go into designing a fully reusable spacecraft that will one day take humans to Mars.

The tour was filmed on July 30, the day Musk tweeted an image of the Raptor Engine system part of the Super Heavy booster that will send Starship into orbit.

SpaceX is working to construct a 160-foot-tall Starship prototype, known as SN20, which they will strap to the Super Heavy booster and launch into orbit.

Starship requires the booster stage to reach orbit and combined, the two reach a whopping 394 feet tall, much larger than the Statue of Liberty with its full plinth, which reaches 305 feet and taller than the NASA SLS moon rocket at 321 feet.

In the interview, Musk spoke about the importance of the manufacturing process over design when it comes to building a major rocket system.

'The launch system and the tower are as complex as either of the stages,' Musk said, adding they can build boosters easier than constructing the launch site