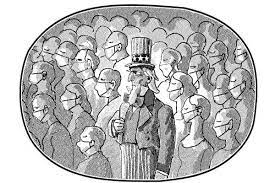 This is not the fringe statement of some obscure crank. It is the view of two doctors at New York's Mount Sinai School of Medicine, one of the nation's most prestigious medical schools, writing in a New York Daily News op-ed this spring.

Now that the COVID-19 pandemic is retreating, it may seem absurd to propose further mask mandates in response to lesser—or even seasonal—viral threats. But Julia Carrie Wong, writing in the Guardian, reports that many Americans like their masks just fine. Francesca, a 46-year-old, fully vaccinated professor in New York, will not abandon her "invisibility cloak" just yet. "It has been such a relief to feel anonymous," she explains. "It's like having a force field around me that says, 'don't see me.'" Becca, a 25-year-old bookstore employee near Chicago, reports that she and her co-workers "prefer not having customers see our faces," because "[w]ith a mask, I don't have to smile at them or worry about keeping a neutral face." Bob, a 75-year-old retiree in New Jersey, says wearing a mask "frees" him from having to "appear happy." Aimee, a 44-year-old screenwriter in Los Angeles, likes the "emotional freedom" that comes from wearing a mask: "It's almost like taking away the male gaze."

Ostensibly, the point of wearing masks is not to furnish oneself with an emotional crutch but to prevent viral transmission. Many Americans have been taught to believe that masks work—at least a little—and that wearing them comes at a minimal cost. Nearly the opposite is true. The best scientific evidence invites a far less rosy assessment of masks' effectiveness than is broadcast by public health officials. And the dubious health benefits of widespread mask-wearing come at an enormous social cost, which is almost never acknowledged by those writing and enforcing the mandates.