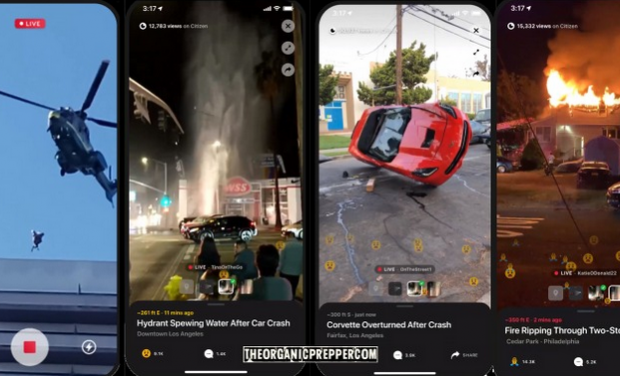 Here in America, we already have facial recognition cameras, traffic cameras, and police cameras watching us 24/7. The Daily Mail reports security cameras record the typical American 238 times a week. And should something terrible happen, such as a fire, burglary, or murder, it's only a matter of time before news agencies show up with their cameras.

Now, add civilians to the mix, spending all day with the sole goal of filming local events. Imagine your family members or co-workers running off to crime scenes or horrific car accidents at the urging of an app on their phone.

Citizen relaunched the app (first launched as Vigilante and quickly removed from the Apple App store over safety concerns) in 2020. Citizen recruits people in select cities to keep their phones at the ready should there be an emergency alert sent out by the app. Should an alert be sent, the user gets to the scene as quickly as possible and begins filming. Citizen pays $200 a day to these "field team members."

According to Citizen, this helps to make for a safer community. Other app users will now have live intel on events happening around them and make appropriate safety decisions. Citizen uses radio antennas to monitor the 911 communications in several major cities. As of this writing, there are over 60 cities covered, including:

Could the Citizen App be beneficial?

The app is ever-growing in popularity as well, with over 7 million users. The Citizen app will only prove to be more effective as time goes on. It has to have a broad user base, or else the whole thing crumbles. It doesn't do too much good if only three people in America are helping to give you real-time video footage.