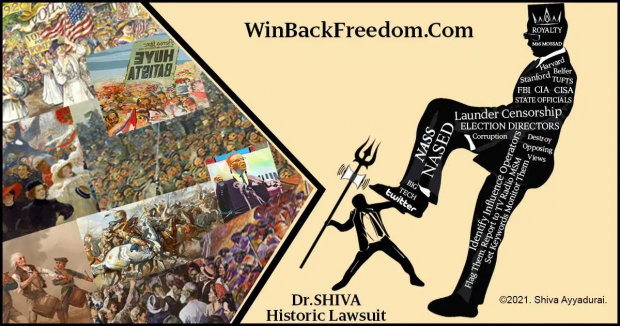 "the government has created a direct portal to social media companies like twitter, to silence speech silently, to launder censorship.
and again, we don´t expect any of the media to cover it, because the media only cover buffoons, like trump."

"the first amendment *has* been violated.  we *don´t* have freedom in this country.  let´s stop talking about 'fighting for freedom' – it´s been lost.  let´s remove our rose-color glasses."

"this _long fuse report_ is, in my view, without hyperbole, as important as the finding of _the pentagon papers_."

"they thought i would just walk away and be happy getting [back] on twitter.  uh-uh!  homie don´t play that game!"

"we have lost freedom in this country.  and it´s not gonna come from donald trump – donald trump takes a real problem and delivers a fake solution."

"and you know why this is happening?  because the american people have been outsourcing their activism to scumbags called republicans & democrats."

"the diversity that they talk about – 'black', 'yellow', 'white', whatever, transgender, this, that – that´s not real diversity!  *real diversity is a diversity of ideas*.
places like harvard have created a multi-racial aristocracy.  they got black people, yellow people, white – but they all think the same way...
these people are actually the real racists.  they wanna segregate everyone into little boxes.  they don´t want me to have a different thought!  they don´t want YOU to have a different thought!"

winbackfreedom.com
↑ info on his RICO lawsuit against government & twitter for their "laundering censorship", and this _long fuse report_ list of very bad boys & girls who say things they´re not supposed to (and probably haven´t had all their shots), and CISA´s clever ways to soft-power shut them up.

HERE ARE SOME VIDEOS PERTAINING TO THE LAWSUIT:

Dr.SHIVA Ayyadurai, MIT PhD, the Inventor of Email, Scientist, Technologist, Educator shares the most recent developments on our historic First Amendment lawsuit. The truth is election officials and government actors have created an enterprise of relationships and infrastructure to surveil, blacklist and silence Americans who they disagree with.

Hearing is scheduled for tomorrow via Zoom. To join via Zoom go to this link: https://forms.mad.uscourts.gov/courtl... . At this link choose August 4, Wednesday hearing and Judge Wolf.

The Defendants are now seeking to have the Court Silence/Seal the lawsuit itself, which is already in the public domain. They seek to conceal the infrastructure that they have created. You can get details at WinBackFreedom.com or get access to the key documents below. Everyone can give $1.00 to be part of our historic movement at WInBackFreedom.com.

The Lawsuit Complaint can be found here: https://u8z8g8c2.rocketcdn.me/wp-cont...

The Network Diagram, a key Exhibit A, is here: https://u8z8g8c2.rocketcdn.me/wp-cont...

Dr.SHIVAQ, MIT PhD, Inventor of Email, Scientist, Technologist, Activist, Educator provides an update to his historic lawsuit that is the first to Expose HOW IT WORKS: How Election Officials and Government Actors Coordinate to Silence Speech.

Americans have lost their freedom. It's time to Win Back Freedom. Donate just $1.00 at WinBackFreedom.com to support this historic lawsuit and be part of the movement.