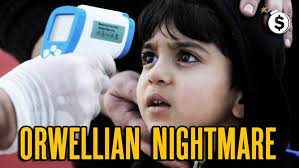 Today, what you should do when you wake up is get a copy of George Orwell's Animal Farm. Read it, then pass it on to your partner/kids/friends/guy in the vaccinated-only bar…

Do it because it's been one of the most widely banned books in the world. And you know what that means – things only get censored when they go against the accepted government narrative, but always nicely packaged as being suppressed and sanitized "for your own good".

Do it also because it's a really skinny easy-to-read book with a really powerful message:

A rule that was conveniently changed by the pigs in charge from the initial "all animals are equal" that everyone had agreed to in the beginning.

You see, this book is a great lesson on how leaders change the rules to suit their own agendas, on governments guaranteeing equality to all but ensuring power and privileges to a select few.

It is also an eye-opener for the masses not to be brainwashed by the ruling class; not to remain neutral or silent and to be wary of false propaganda of any new leadership that might take control over personal freedoms and liberties.

Sound familiar at all?

Little surprise then that while few countries ban Animal Farm now (probably because the threat of people actually reading has become extinct), it has been on the Big List of Forbidden Books in as many as 126 countries throughout it's life.The most notorious instances:

- Banned in the former Soviet Union, for obvious reasons. Stalin wasn't well known for his humbleness or sense of humour.

- It is still banned in the United Arab Emirates.

- Printers were discouraged from printing it in the UK during WW2 because it was thought it might provoke the USSR allies.

- North Korea – doesn't take much to be banned there. The book questions authoritarian leadership and that wouldn't play well in a country built around the cult worship of a leader.

- And finally, Animal Farm is listed in the Top 100 list of books regularly challenged in the US. At one point, The New York State English Council's Committee on Defenses Against Censorship indicated that the book might be problematic in a classroom setting, citing, "Orwell was a communist."