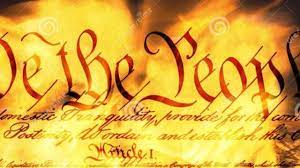 Sadly, the true nature of this tyranny still eludes the understanding of most citizens, in part because the process by which America was transformed utterly has been slow, in part because the commercial media points us away from the true causes of this slippage and pins all blame on easily identifiable bad guys.

Those seeped in the progressive political tradition sensed a radical loss of justice and transparency under the George W. Bush administration, a trend that only accelerated under the Trump administration—with a perceived reprieve under Obama and the possibility of a positive turn under Biden.

Those marinated in the juices of conservative politics observed an end of freedom and the spread of fake "leftist," ideology that oppresses the citizen under Clinton and Obama.

Both interpretive communities refer to the same social and political trends, to the war on freedom that renders us up as sacrificial lambs to the cruel gods of global capital. The rhetoric employed by the two groups is so radically different, however, and the histories of the United States that they embrace are so divergent, that they are lost in intense ideological conflicts even as they describe the same creeping totalitarianism.