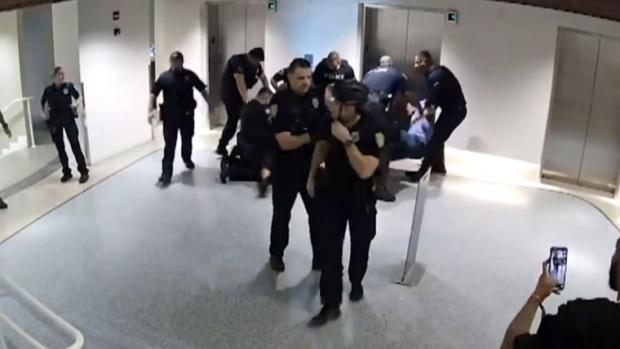 Surveillance footage released Monday shows a suspect, 24-year-old Dalonta Crudup, being kicked repeatedly and having his head slammed into the ground.

It also shows officers tackle and punch a bystander who was filming the incident from several feet away.

They have been relieved of duty while an internal investigation is underway, WPLG reported.

Officers said they were trying to stop Crudup for illegally parking when he struck an officer with his motor scooter while attempting to flee the scene.

Police caught up with Crudup at the Royal Palm Hotel in South Beach where they arrested him and reportedly turned physical.

Sgt. Jose Perez is accused of kicking the suspect, who was handcuffed, three times and slamming his head into the ground.

'I got beat up, I got stitches, went to the hospital,' Crudup told the TV station.

Crudup was charged with aggravated battery on a law enforcement officer, fleeing and eluding police, aggravated assault on a police officer and resisting arrest with violence, the Miami Herald reported.

Meanwhile, video shows Officer Sabater charging at Khalid Vaughn, 28, who was recording the altercation from about 12 feet away, and tackling him to the ground. The officer is also accused of punching the bystander repeatedly.