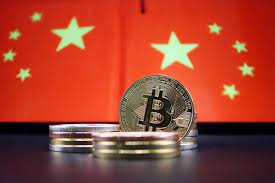 ... in computations every second to solve the mathematical problems that power the Proof of Work token, and which generate generous rewards for the miners.

All of this changed this year, however, when the double whammy of an ESG-inspired blowback against the miners' high electricity consumption coupled with China's attack on digital currencies that compete with its own digital yuan, meant an unprecedented crackdown on the local bitcoin mining industry, resulting in countless mainland bitcoin miners shutting down and in many cases moving to more hospitable (and cleaner energy) venues such as Texas and Florida.

What follows is a fascinating story documenting the rise and stunning fall of China's bitcoin mining industry, and one company in particular, as told by Caixin.

For the past year and a half, the loud whirring of tens of thousands of high-power computers filled a cavernous warehouse round-the-clock, making a stark contrast with the hushed forests of the Ngawa Tibetan and Qiang autonomous prefecture in Southwest China's Sichuan province. This computational arsenal belonged to a crypto mining farm, a facility crammed wall-to-wall with specialized computers dedicated to solving the complex math problems that keep the network running, and earning new Bitcoin along the way.