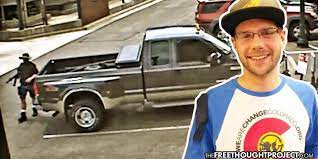 In June, a deranged gunman, 59-year-old Ronald Troyke, began what was about to be a deadly mass shooting. His first victim would be Arvada Police Officer Gordon Beesley, and, according to the reports that evening, his next victim would be liberty activist and friend to many members of the Free Thought Project, including this author, Johnny Hurley. But it didn't quite unfold like the original reports claimed. Hurley was actually the hero who stopped the gunman and when other officers arrived on scene, they killed the hero.

It has been over a month since Hurley's death and other than police admitting they were the ones who killed him, no other information has come out. There were surveillance cameras which captured Troyke shoot officer Gordon Beesley and which filmed the interaction between Hurley and Troyke, and the officer or officers who showed up and killed him. However, none of this video has been released.

To those who witnessed the shooting, Hurley was hailed as a hero. He had stopped the deadly threat and saved many lives in the process. But his time as a living hero was only brief. Moments after saving countless lives, Hurley would be killed by police.

Police claim, though offered up no evidence to back it up, that Hurley had picked up Troyke's AR-15 and an officer or officers opened fire on him, mistaking him for the shooter.