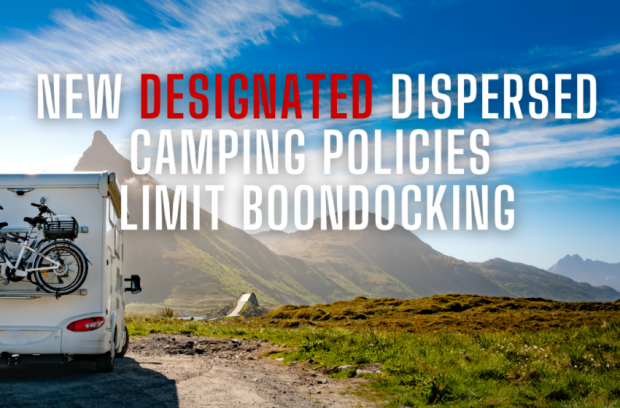 We've been reporting for months about the dispersed camping spots that are being closed to RVers. Just giving a listen to our regular podcast (now also in video format) will show you how serious this is at the moment.

But short of outright closing, federal officials in several places have been quietly implementing much stricter policies that end up greatly limiting boondocking opportunities in those lands.

They're calling it designated dispersed camping.

The word to note is "designated" in dispersed camping

It's not everywhere. Yet. But it is happening enough to raise lots of concern.

On public lands, dispersed camping policies allow camping pretty much everywhere on federal lands so authorized. There traditionally have only been a few stipulations, such as:

-How close to flowing water you may camp

-How far from roadways your campsite must be

-Where you are allowed to camp in the area

-How long you can camp there

But areas open to dispersed camping have largely allowed the camper to responsibly chose the spot, as long as they don't damage the environment and respect the posted rules.

Should I Weigh My RV?