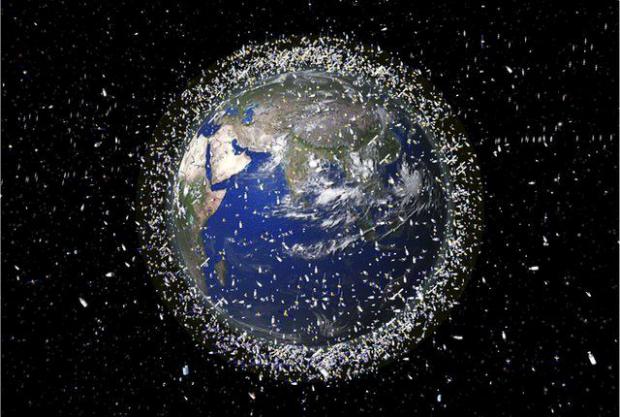 In the early 1960s, the U.S. military wanted to devise a new way of communicating with its forces around the globe. If an enemy severed undersea cables, they could only rely on bouncing radio signals off of the ionosphere, which was an unreliable method. The Cold War-era solution? A program called Project West Ford, a plan to launch 480 million tiny slivers of copper needles into space, giving Earth an artificial ionosphere and a reliable way to communicate.

After the first batch was successfully launched, however, the program was canceled. One reason was the accelerated development of communications satellites. The other was that everyone realized that sending countless bits of random junk into space was probably a bad idea.

Since then, the amount of space junk has only grown. In Earth orbit, there are more than 23,000 objects larger than about 4 inches (10 centimeters), another half a million objects larger than about 0.4 inch (1 cm) and possibly 100 million more smaller than that, according to NASA. And there's all sorts of stuff up there: dead spacecraft, spent rocket boosters, lost gear from space missions (including a glove, a camera, a blanket, a wrench and, somehow, a toothbrush), random bits of wrecked gear, paint flecks, bits of metal, frozen propellant, and a lot of screws and bolts.

Space is getting messy, and it's making life dangerous.

On April 24, 1996, the U.S. Ballistic Missile Defense Organization used a Delta II rocket to launch an infrared monitoring satellite into orbit. About a year later, Lottie Williams of Tulsa, Oklahoma, was minding her own business in a park when she was struck in the shoulder by a 6-inch-long (15 cm) piece of fiberglass and aluminum. Minutes later, more pieces of the second stage of that Delta II rocket crashed a couple hundred miles away.