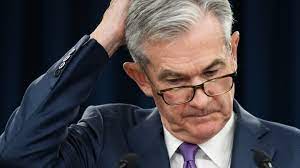 Whewwww. Where to even begin in unpacking the lighthouse of reality behind so much verbal fog?

When it comes to market analysis, no one wants to hear political opinions within finance reports, left or right.

Thus, rather than run the risk of offending the left, right or center, I'll be frank in confessing my foundational view that nearly all politico's (and Fed Chairs) have been universally comical when it comes to math, history or blunt-speak.

In short, the math, facts and warning signs rising by the hour (and outlined below) make it easy to be an equal-opportunity cynic when it comes to fiscal leadership or political "truth."

So, let's get back to Biden's recent observations…

As for inflation being "short-term," we've written ad nauseum about our stance on this fiction many times elsewhere.

But as for Biden's declaration about the Fed being "independent," let me wipe the coffee I just spilled on my shirt and speak plainly: That's a lie.

The 'Great Game' Moves On