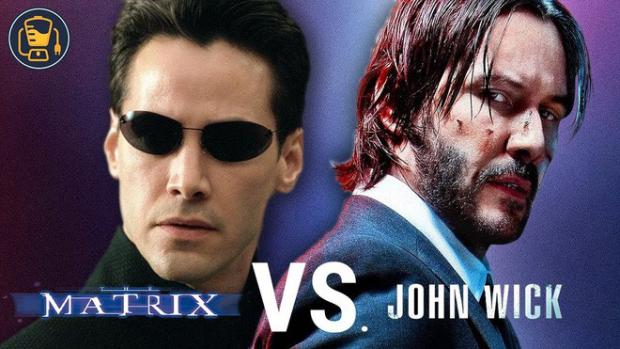 Two blockbuster Keanu Reeves sequel movies are on the way in 2022, John Wick 4 and The Matrix 4, but which one is the more exciting prospect? Reeves is one of those actors that seems to be eternally popular with moviegoers, having been starring in hit films since the late 1980s. In addition to being eternally youthful in appearance, Reeves has shown a knack for reinventing himself, managing to boost his Hollywood profile every few years with a new crowd-pleasing role in a new hit film or franchise.

When it comes to Reeves' most iconic character to date though, there tends to be three popular choices, depending on which type of Keanu a particular fan prefers. For those who dig comedic Keanu, there's Ted "Theodore" Logan, soon to return in Bill and Ted Face the Music. For those who prefer their Keanu more introspective and serious, there's Neo, the one destined to lead humanity against the machine overlords in the Matrix trilogy. And for those who like Keanu with a darker badass edge, there's retired assassin John Wick.

Originally, The Matrix 4 and John Wick 4 were set to go head to head on May 21, 2021, in what some were calling Keanu Reeves day. Of course, that was before the Coronavirus pandemic, and both films have now been pushed back to 2022, with Matrix 4 opening on April 1 and John Wick 4 opening on May 27. The question still remains, however: which movie is more exciting?

The Matrix 4 Is Keanu Reeves Returning To His Biggest Role

Keanu Reeves has now been the central figure in two enormous action film franchises, as Neo in The Matrix and now John Wick. Both trilogies have been praised for their action sequences and their incredible special effects and fight choreography, but which one is the better franchise? Here's our breakdown.