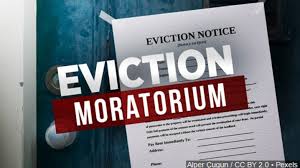 The White House said President Joe Biden would have liked to have extended the federal eviction moratorium due to the spread of the delta variant. Instead, Biden called on "Congress to extend the eviction moratorium to protect such vulnerable renters and their families without delay."

The moratorium was put in place put in place last September by the Centers for Disease Control and Prevention.

"Given the recent spread of the Delta variant, including among those Americans both most likely to face evictions and lacking vaccinations, President Biden would have strongly supported a decision by the CDC to further extend this eviction moratorium to protect renters at this moment of heightened vulnerability," the White House said in a statement. "Unfortunately, the Supreme Court has made clear that this option is no longer available."

The court mustered a bare majority, 5-4 last month, to allow the eviction ban to continue through the end of July. One of those in the majority, Justice Brett Kavanaugh, made clear that he would block any additional extensions unless there was "clear and specific congressional authorization."