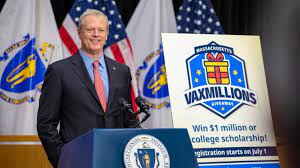 Massachusetts on Thursday announced the first two winners of its VaxMillions giveaway as the state attempts to drive up its vaccination rate as COVID cases rise.

Gov. Charlie Baker announced in a press conference that Darrell Washington, of Weymouth, a case worker for Blue Cross Blue Shield, had won $1 million in the sweepstakes. Daniela Maldonado, a student from Chelsea, won a $100,000 scholarship.

Thursday's winner was chosen from the first drawing, which happened Monday. The announcement of the winner was scheduled for Thursday, per the schedule released by the state last month.

Nearly two million adults have signed up for a chance to win the $1 million prize and around 135,000 teenagers, ages 12 to 17, registered for the $300,000 college scholarship grants as of Friday afternoon, per Gov. Charlie Baker's office.