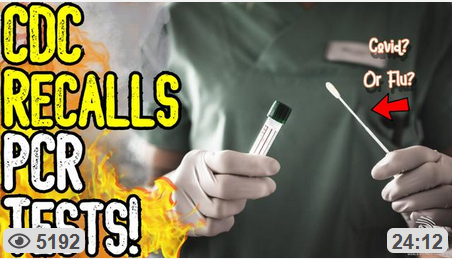 Josh Sigurdson reports on the recent news of the CDC and FDA announcing a recall of RT-PCR tests as they cannot differentiate between covid and the flu. This is something we were shouting from mountain tops from the beginning of 2020.

While our channel was deleted for medical disinformation, we now have the CDC, the FDA and earlier this year, the WHO acknowledging what we have been saying is true.

What does this mean? It means that with a 96% false positive rate, there is either a few thousand cases of covid worldwide, or there are none and ALL cases have been influenza dressed up with fear to push everyone into cowardly subservience. This is massive. All of the fact checkers, all of the slaves telling us we are killing old people by speaking this scientific truth have now eaten their words. But despite this, it is obvious that the media will not mass report this news. They will not admit publicly that we were right.

In fact, it appears that despite the recall, most places are upping their game as they require PCR tests if people have not been vaccinated. This includes New York City. So even when faced with scientific facts, the establishment will call us anti-science, they'll ignore the science and they'll continue on with their control racket as they know well that the vast majority of people will bow at their boots no matter what information they receive.

The Borg Says: "Assimilate or Starve!"