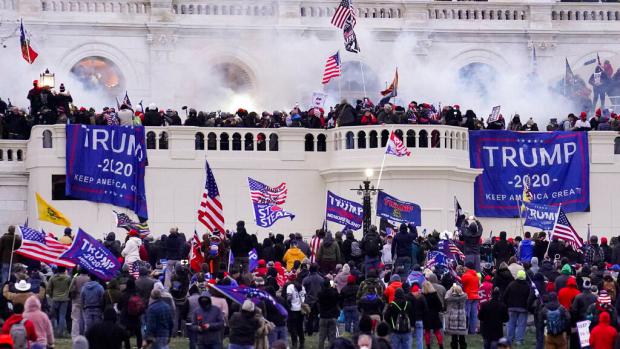 A crane operator from Tampa, Florida, Hodgkins, 38, pleaded guilty to a single count of obstructing a joint session of Congress called to confirm Joe Biden as the next president.

Hodgkins entered the Senate chamber carrying a Trump 2020 flag. He committed no assault, no act of destruction, no act of violence. Yet, he was sentenced to eight months in prison by U.S. Judge Randolph Moss.

Special Assistant U.S. Attorney Mona Sedky argued for a sentence of twice that length, a year and a half, because, as she told the judge, "Jan. 6 was genuinely an act of terrorism."

But is that true? Was Jan. 6 "an act of terrorism" — of the character if not the magnitude, say, of the Oklahoma City bombing?

To call Jan. 6 "domestic terrorism," said Patrick Leduc, is "offensive and gaslighting the country … It was a protest that became a riot, period, full stop."

Leduc is correct: Jan. 6th was a riot. Had it truly been "domestic terrorism," as the U.S. attorney claimed, why would she have accepted a guilty plea for a single nonviolent offense?

Why did she not throw the book at the terrorist?

Looking back, what was Jan. 6 in reality?

A huge pro-Trump demonstration of tens of thousands, out of which a mob of hundreds moved on the Capitol, broke police lines, assaulted cops, rampaged and disrupted an official proceeding.