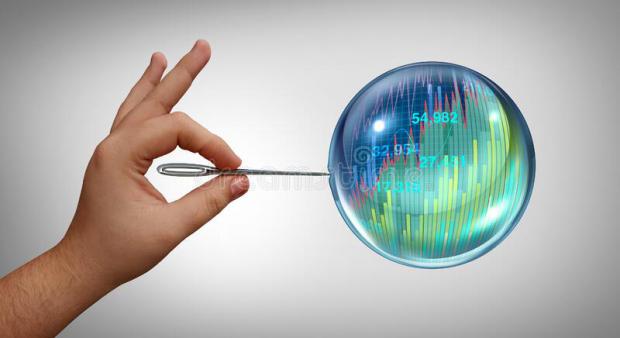 Well, as Reid writes, "it seems this is unfolding right in front of our eyes" however, with the Nasdaq trading at all time highs, the bubble in question is not in the US but China.

As Reid shows in his latest chart of the day, the NASDAQ hit fresh all-time highs overnight, while Hong Kong's Heng Seng Tech index (which represents the 30 largest tech companies in HK with high exposure to "innovative tech themes") is now down 43% since the February highs and down 16.6% over the last three sessions.

As we documented over the past 48 hours, this sell-off started last week as a recent Beijing regulatory drive scared markets, then accelerated overnight amid speculation that US money is moving out of the region, fuelling concerns over foreign capital flight.

For those not following the story, Beijing has been trying to rein in private companies that it sees as creating inequality, financial instability risk and challenging the government's authority. It seems to be putting its longer-term strategy goals ahead of short-term market stability.

As Reid concludes, "it's not clear how much this will filter into global risk as it's a very specific regulatory story to China but the late Asian sell-off overnight has certainly led to a notable risk off this morning" and adds that "we've all been closely watching for signs big US tech will be heavily regulated going forward but it's actually been China that has aggressively moved on this."

Of course, as Michael Every of Rabobank this morning mused, it is naive to assume that the widespread crackdown against oligopolists will begin and end in China at a time when US progressives have never been more vocal.