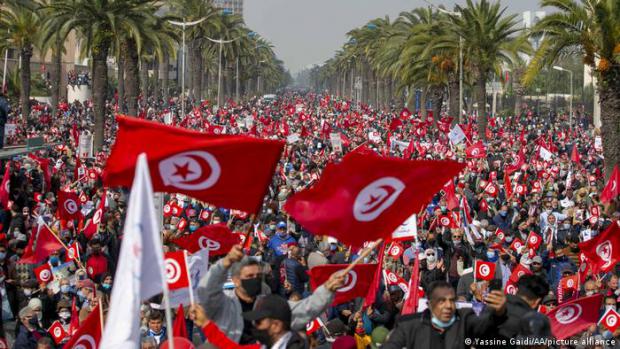 Now, Tunisians are taking to the streets to push back against a coup instigated by President Kais Saied, who froze parliament and ousted the prime minister - his top political rival - with the support of the army.

President Saied made a declaration Sunday evening that froze parliament and suspended the PM for 30 days. The president and the parliament were both elected in separate popular votes in 2019, while PM Hichem Mechichi took office last summer, replacing another short-lived government. Once it's over, Saied said he will govern alongside a new premier.

Saied said in his statement that his actions were in line with Article 80 of the constitution. He also cited the article to suspend the immunity of members of parliament.

At least three of the main parties, Heart of Tunisia, Ennahda and Karama, have joined together to accuse Saied of plotting a coup.

Thousands of Tunisians took to the streets in response, sparking what Reuters described as "Tunisia's worst crisis in a decade of democracy". Opposition parties, including the Islamists, have denounced President Saied's takeover as a coup. The military has closed the country's borders, suspended air travel

The crackdown follows months of deadlock and political infighting that pitted President Saied, a political independent and a stuffy constitutional lawyer who prefers speaking in classic Arabic, against PM Hichem Mechichi and a fragmented parliament. President Saied blamed the gridlock for exacerbating an economic crisis in the country.

Parliament Speaker Rached Ghannouchi, the head of the moderate Islamist Ennahda party, which has played a role in several governing coalitions, encouraged Tunisians to take to the streets to combat this latest assault on democracy.