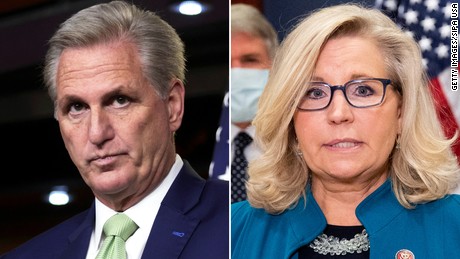 Liz Cheney said on Monday that Kevin McCarthy is 'childish' for labeling her and Adam Kinzinger, the only two members of the GOP on the January 6 committee, 'Pelosi Republicans.'

'We've got very serious business here. We have important work to do,' she said to reporters on Capitol Hill.

Kinzinger told reporters on Monday that McCarthy 'can call me whatever names he wants,' before reassuring, 'I'm a Republican.'

'If the conference decided, or if Kevin decides, they want to punish Liz Cheney and I for getting to the bottom and telling the truth, I think that probably says more about them than it does for us,' he continued in response to the House Minority leader suggesting there could be consequences for the duo.

McCarthy answered 'we'll see' when asked Monday if he would punish Cheney of Wyoming and Kinzinger of Illinois for joining the Democrat-led January 6 select committee.

He called the duo of anti-Trump GOP lawmakers 'Pelosi Republicans.'

When asked when he had last talked to them he told DailyMail.com, 'Couldn't tell you.'

The GOP leader is under pressure from some members of his Republican caucus to crack down on Cheney and Kinzinger, who joined the panel investigating the MAGA riot at the invitation of Speaker Nancy Pelosi.

A spokesperson for Kinzinger added, 'It would speak volumes if he took away their committee assignments to 'punish them' for upholding their oath to protecting our democracy.'