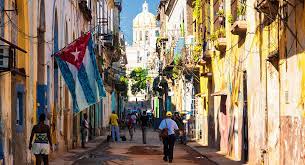 La Revolucion, it appears, is moving into the last stage of what we might call the Niemietz Cycle in honor of Kristian Niemietz's excellent-and-downloadable-for-$0 book Socialism: The Failed Idea That Never Dies (I review it here and here).

The first stage is the "honeymoon" stage where things look like they're going well. Contrary to what neoliberal naysayers might think, short-run successes seem to prove that socialism is viable.

In the second stage, which Niemietz calls the "Excuses-and-Whatabouttery" stage, mounting socialist failures are explained away as the products of a series of unfortunate (and entirely coincidental) events, like weather in the Soviet Union and Zimbabwe. In the case of Cuba, we're told–as we have been hearing for six decades–that the country's problems aren't because of socialism. They're actually because of the US embargo. If it weren't for the embargo, we're told, the regime would be stable and socialist Cuba would thrive.

I think the embargo is a terrible idea that should be lifted immediately, as it has given Cuban communists a convenient scapegoat for their country's problems. The embargo, however, is not what causes Cuba's woes, and people blaming the embargo overlook the fact that Cuba trades pretty extensively with the rest of the world–how else do you think Canadian and Mexican merchants get the Cuban cigars they hawk to American tourists? It's not because a Cuban Rhett Butler is smuggling them past a blockade. It's because Cuba trades freely with the entire world. I suspect the US embargo hasn't really hurt Cuba that much more than the "transgender bathroom" boycott hurt Target.