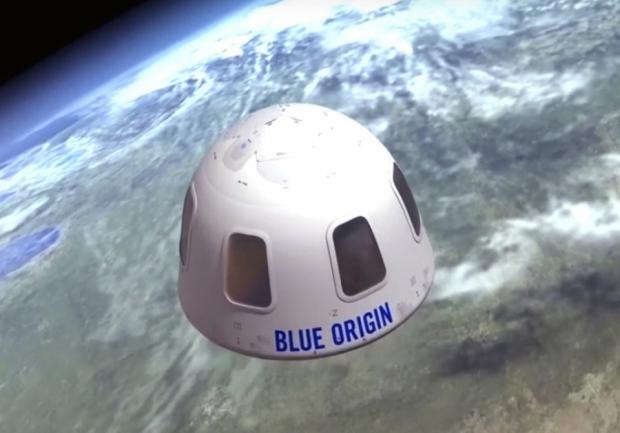 An ecstatic Dutch teenager declared 'that was great' after making history today by becoming the youngest astronaut in space.

Oliver Daemen, 18, fell into his father's arms after safely emerging from Jeff Bezos' New Shepard rocket which shot into space for a trip lasting just over 10 minutes.

'Thank you very much, that was great,' the physics student was heard saying in a livestreamed video from the landing site in the Texan desert.

Joining Oliver on the flight was Bezos himself, his brother Mark Bezos, Mary Wallace 'Wally' Funk - a pioneering female astronaut who was making her maiden voyage into space aged 82 - who all popped champagne and embraced loved ones after landing.

Oliver, who has now become only the fourth Dutchman to go to space, said the flight was a life-changing experience.

'Every second of this flight was indescribably intense. The mighty effect of the G-forces on your frame, the epic moment you leave the atmosphere. The view of the earth from space is unforgettable,' Dutch newspaper Algemeen Dagblad quoted him as saying.

'Back on the ground, you realize how extremely vulnerable our planet is in the vast galaxy. I realize now more than ever that we have to be extremely careful with the earth. I want to contribute intensively to that.'

The recent high school graduate, who this summer earned a private pilot's license, was part of the first crewed flight of the New Shepard, a rocket ship built by Bezos' company Blue Origin to cater to a future market for space tourism, which launched today from a site near Van Horn, Texas.

Oliver credits Thunderbirds with sparking his fascination with space and rockets at a young age.

His dream of travelling to space was made possible by his father Joes Daemen, a private equity boss who placed the second place bid in the auction, before the $28million winning bidder deferred to a later flight.