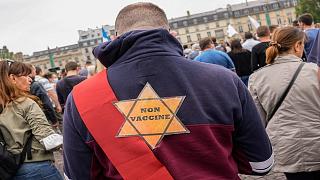 As more than 100,000 people marched around France against government vaccine rules on Saturday, some demonstrators wore yellow stars recalling the ones the Nazis forced Jews to wear. Other demonstrators carried signs evoking the Auschwitz death camp or South Africa's apartheid regime, claiming the French government was unfairly mistreating them with its anti-pandemic measures.

"You can't imagine how much that upset me. This comparison is hateful. We must all rise up against this ignominy," Holocaust survivor Joseph Szwarc said Sunday during a ceremony commemorating victims of antisemitic and racist acts by the French state, which collaborated with Adolf Hitler's regime.

"I wore the star, I know what that is, I still have it in my flesh," Szwarc, who was deported from France by the Nazis, said with tears in his eyes. "It is everyone's duty to not allow this outrageous, antisemitic, racist wave to pass over us."

Historian and former Nazi hunter Serge Klarsfeld also took aim at the analogy, stressing Monday that "the yellow star was a symbol of death that excluded Jews from society and marked them for extermination, while vaccines, on the other hand, save lives." To equate the two, he told The Associated Press, is an "odious" comparison that serves to trivialize the yellow star.

French government spokesman Gabriel Attal lamented the "absolutely abject comparisons" of vaccine rules to Nazi atrocities, and he urged other political leaders to speak out.

Attal later stressed the need for vaccinations despite some increasingly radical pockets of resistance.