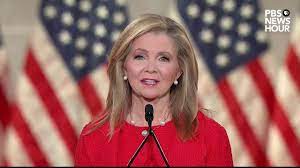 Sen. Marsha Blackburn (R-TN) is urging her GOP colleagues nationwide to join her in fighting the "culture war" against a rising radical left influencing various American institutions from entertainment to sports, corporations to media and on to government.

Blackburn's comments came in a long-form, 65-minute exclusive video interview, conducted in two parts in Tennessee late last month as part of Breitbart's On The Hill video series, where she laid out the battle lines between the left and the right in the "culture war" in America.

Blackburn sat down with Breitbart News at her home just outside Nashville, and also at Puckett's, a supermarket, restaurant, and live music venue here in Franklin at which many of Nashville's biggest country stars have performed.

"The way I look at this culture war is you've got the left and those that are pushing towards Marxism," Blackburn said when asked to define the sides of the culture war. "They are lined up on one side. You have those that are more constitutionalists and traditionalists who want to preserve our American values of faith, family, freedom—preserve free markets—they are on the other side."

Blackburn told Breitbart News that faith and family are both big parts of her life—and define her political decision-making process.