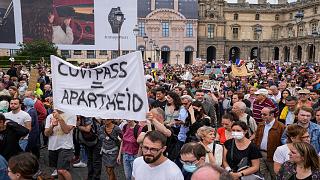 In Paris, separate protest marches by the far-right and the far-left wound through different parts of the city. Demonstrations were also held in Strasbourg in the east, Lille in the north, Montpellier in the south and elsewhere.

Thousands of people answered calls to take to the streets by Florian Philippot, a fringe far-right politician and former right hand of Marine Le Pen who announced earlier this month that he would run in the 2022 presidential election. Gathered a stone's throw away from the Louvre Museum, protesters chanted "Macron, clear off!", "Freedom," and banged metal spoons on saucepans.

They denounced the government's decision on Monday to make vaccines compulsory for all health care workers, and to require a "health pass" proving people are fully vaccinated, have recently tested negative or recovered from the virus in order to access restaurants and other public venues. President Emmanuel Macron's government is presenting a draft law Monday to enshrine the measures.