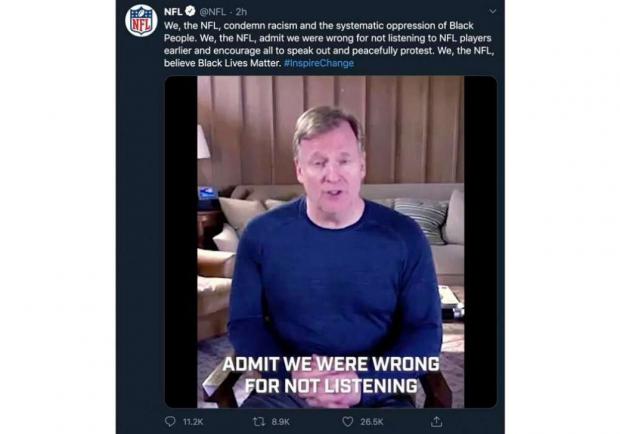 The National Football League, known for its plummeting ratings after coming out in support of anti-White rhetoric, is reportedly planning to replace the "Star-Spangled Banner" with a song nicknamed the "black national anthem" on Opening Day, relegating the American national anthem to the role of following "Lift Every Voice And Sing."

ESPN reported on Friday that a source confirmed the "black national anthem" would be played before every game in the first week of the season, including the opening daty game between the Houston Texans and Kansas City Chiefs on Sept. 10.

Additionally, "the NFL, in collaboration with the NFL Players Association, is also considering listing the names of victims on uniforms through decals on helmets or patches on jerseys." Various "victims" championed by Black Lives Matter include convicted felons such as George Floyd and Jacob Blake, as well as individuals who were killed while attacking other people such as Ma'khia Bryant and Trayvon Martin.

The NFL also plans to donate $250 million to racial social justice causes over the next ten years, and is reportedly even looking into creating political video content and "educational programs" to lecture sports fans about black grievance.

Evander Holyfield, 58, is brutally floored in the first round by Vitor Belfort as 'disgraceful**