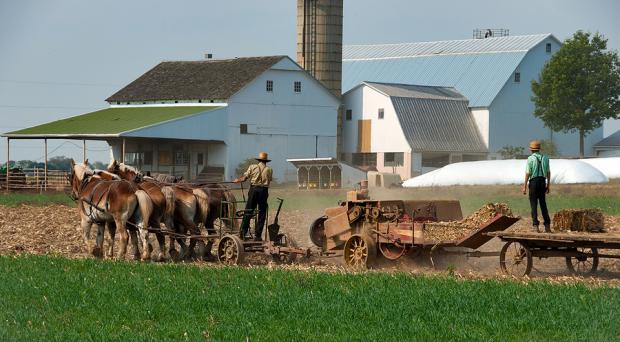 For example, this is what one person in the alternative media wrote recently:

A food war is brewing and American farmers and ranchers are on the front lines. Family owned farms are the backbone of America. Ninety-eight percent of U.S. farms are operated by families. Eighty-six percent of all U.S. agricultural products are produced on family farms or ranches. In 2018, about $140 billion worth of agricultural products were exported to the world, making the U.S. a top food exporter. Their blood, sweat, and tears bring food to tables across America and the world.

I seriously doubt that the person who wrote this even knew that they were parroting corporate talking points to present a wholesome image of American agriculture. Because the truth is that these "family farms" are just a handful of corporate billionaires who control the world's food supplies and can weaponize it at any time, by creating "food shortages."

These "family farms" are corporate mega-businesses dependent on cheap migrant labor, most of them here illegally to keep the U.S. food system propped up, and the only thing "family" about them is that the stockholders are all family members.

If this is a topic you are not well informed about, it is high time you wised up about just where your food actually comes from. If you have not read it yet, you need to read the article by Sam Parker we recently published here, which is the first time I have ever read such an exhaustive exposé that names names on just who controls the world's food supplies:

Unmasking The Global Food Cartel: Is Massive Starvation and Population Reduction Their Next Move?

Most Americans have absolutely no clue where their food comes from, and are totally dependent on the commodity-based food system that fills the shelves of America's grocery chains. As a result, Americans spend the lowest percentage of their income on food than any other nation in the world.

Should I Weigh My RV?