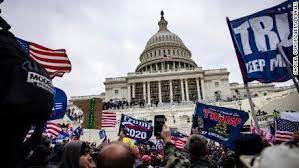 Jorden Mink, the defendant in the case, was indicted (pdf) on several federal charges, including destruction of government property and theft. Mink, who has pleaded not guilty, has been held in jail since January. Officials have alleged Mink used a baseball bat to smash windows at the Capitol and passed furniture through the smashed windows to the crowd outside.

"I can't allow someone to sit in prison for this long without access to material," Judge Randolph Moss said at a court hearing on Thursday, saying the delay in evidence was "utterly unacceptable" and "not consistent with due process."

During the Thursday court hearing, prosecutors said they had given the evidence to the jail in May and didn't understand why Mink hasn't been able to obtain the documents. Mink was offered a plea deal, prosecutors noted, but they said he can't decide on whether to accept the deal because he hasn't seen the evidence against him.

Randolph ordered prosecutors to work with the jail to grant the defendant access to the evidence against him by the end of Thursday, reported CNN. If Mink doesn't gain access to the documents soon, the judge said, his detention may be reconsidered.