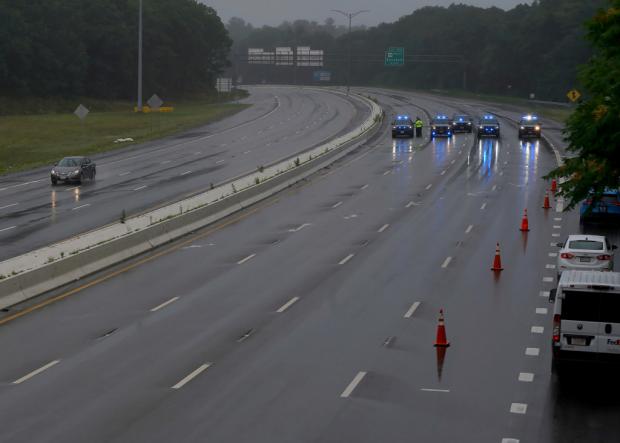 This is the moment cops confronted the leader of Rise of the Moors and he refused to drop his weapons when the citizen militia refueled at the side of Massachusetts interstate - sparking a nine-hour armed stand-off.

Police body camera footage showed Massachusetts State Police approaching two cars with their hazard lights on parked on the shoulder of Interstate-95, near the town of Wakefield, around 1.30am on July 3.

The group of heavily armed men were refilling gas tanks with their own fuel and told law enforcement that they were headed to Maine for 'training.'

Bodycam footage taken by a cop at the scene shows what led up to the standoff. It begins with a cop pointing a flashlight at the cars as the group's purported leader Jamhal Tavon Sanders Latimer, 29, also known as Jamhal Talib Abdullah Bey, approaches him.

The cop questions what the group are doing and Latimer, a former U.S. Marine, says, 'We're a local militia from Rhode Island. We're going to Maine. We weren't going to be make unnecessary stops. We have fuel in our truck so we can gas up here so that way we could just keep going through.'

The cop asks if they have their licenses and they all say 'No, we don't have licenses.' They again say no when asked if they have any forms of identification.

Asked what they were planning, Latimer says, 'I have private land in Maine so we're going up to do some training there.'

Latimer agrees to give him personal information and the cop asks for his name, birthday and social security number.