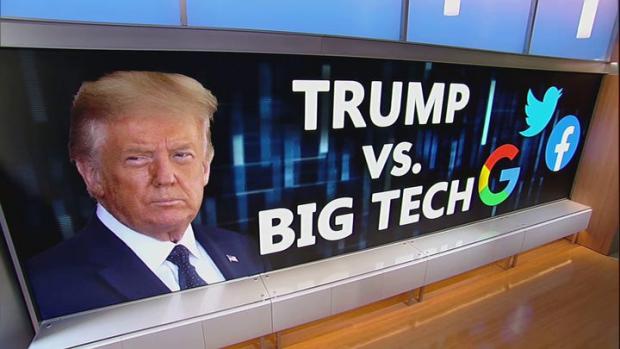 Following last week's announcement that President Trump was filing a class-action lawsuit suing the CEOs of Facebook, Twitter and Google over allegations of illegal censorship, Trump has published an op-ed in the Wall Street Journal where he lays out his legal team's argument: Big Tech has colluded with government to censor the free speech of the American people, Trump said.

Since social media has become "as central to free speech as town meeting halls, newspapers and television networks were in prior generations." Despite the fact that the internet is "the new public square", Big Tech has become increasingly "brazen and shameless in censoring and discriminating against ideas, information and people on social media - banning users, deplatforming organizations, and aggressively blocking the free flow of information on which our democracy depends."

"No longer are Big Tech giants simply removing specific threats of violence. They are manipulating and controlling the political debate itself."

Trump also cited Big Tech's decision to bar him from Facebook, Twitter and YouTube. "Perhaps most egregious, in the weeks after the election, Big Tech blocked the social-media accounts of the sitting president. If they can do it to me, they can do it to you—and believe me, they are."

While Chinese and Iranian propagandists are allowed to operate with impunity, social media platforms have attacked a Michigan schoolteacher for sharing an article questioning whether mandatory masks are suitable for young children in schools. A Florida couple that lost their 21-year-old son in a fatal car accident caused by a 2x-deported illegal immigrant was censored by Facebook when they posted about border security and immigration enforcement, Trump said.