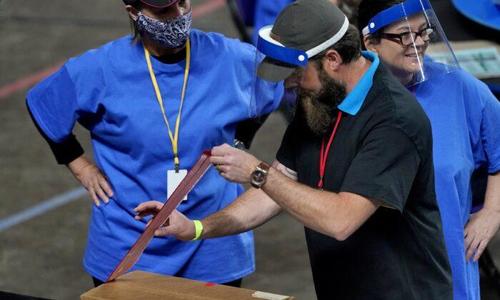 Nearly 2.1 million ballots submitted in Maricopa County for the presidential contest were tabulated, as normal, by election officials. They were recounted by hand by audit teams hired by the Arizona Senate in a process that was completed late last month.

Now the Senate will do its own recount that will provide a number to compare to those from the county and from the auditors.

"Maricopa County says there's 2,089,563 ballots. We did the hand count, and they're finalizing that number, but we just wanted a third number to tie everything together, make sure we have more—the more data points, the better," former Arizona Secretary of State Ken Bennett, the Senate's audit liaison, told The Epoch Times.

The new count will focus on the number of ballots and will not count the actual votes, unlike the first two tabulations.

The Senate will use two counting machines that it purchased to complete the count, Arizona Senate President Karen Fann, a Republican, told the Arizona Republic.

"We're going to run all the ballots through to see how they match up," she said.

"If there ends up being a difference, we'd have another count."