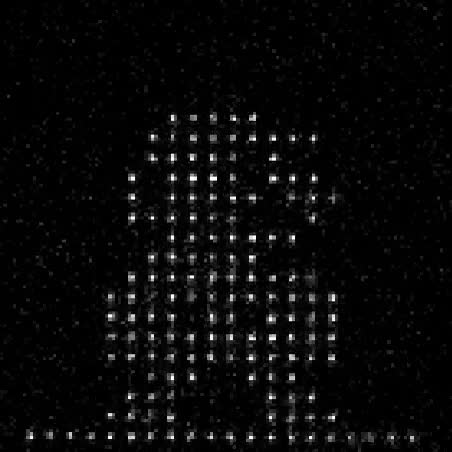 Above – By arranging them in sequential frames and taking images of single atoms, the researchers can even make fun atom videos. Courtesy of Lukin group

According to Sepehr Ebadi, a physics student in the Graduate School of Arts and Sciences and the study's lead author, it is the combination of system's unprecedented size and programmability that puts it at the cutting edge of the race for a quantum computer, which harnesses the mysterious properties of matter at extremely small scales to greatly advance processing power. Under the right circumstances, the increase in qubits means the system can store and process exponentially more information than the classical bits on which standard computers run.

"The number of quantum states that are possible with only 256 qubits exceeds the number of atoms in the solar system," Ebadi said, explaining the system's vast size.

Already, the simulator has allowed researchers to observe several exotic quantum states of matter that had never before been realized experimentally, and to perform a quantum phase transition study so precise that it serves as the textbook example of how magnetism works at the quantum level.

Will Biden Start Nuclear War with China Over Taiwan?