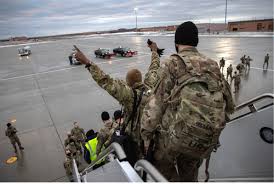 Additionally Biden said he "won't send another generation to war in Afghanistan," urging Afghan leaders "to come together to drive the future."

As AntiWar.com's Dave DeCamp detailed earlier, Politico published an article on Wednesday that cited two unnamed US officials who said the Afghanistan withdrawal is essentially complete, although there are plans to keep troops in the country. "The withdrawal is over, for all intents and purposes," one official said. "It's done."

The official said currently, about 600 US troops remain in Afghanistan. Most of the troops are Marine Corps or Army personnel who will stay at the US embassy in Kabul. The rest of the 600 will be based at Hamid Karzai International Airport, which is also located in Kabul.

The report said these 600 troops will stay after the US officially completes the withdrawal. The only military personnel left in Afghanistan that will be pulled out before President Biden's September 11th deadline are Gen. Scott Miller, the top US commander in Afghanistan, and his staff.

As part of Washington's post-withdrawal plans, Miller's authority to carry out operations in Afghanistan will be transferred to Gen. Frank McKenzie, the head of US Central Command. The Pentagon has established a new military command structure that will run out of the Kabul embassy, and its duties will go beyond diplomatic security.

If Biden's Mandates Force Millions Of Americans Out Of Their Jobs,