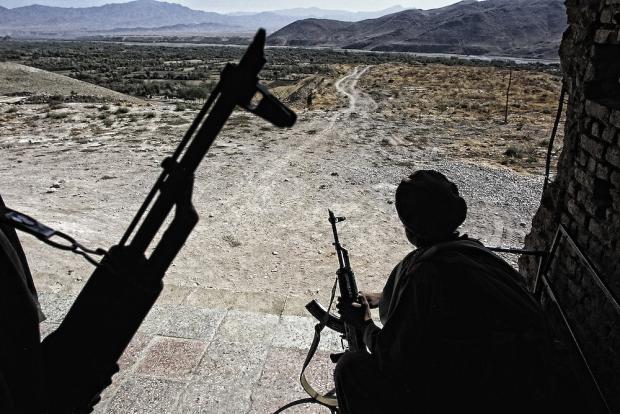 Afghan troops have been filmed laying down their arms to the Taliban as the terror group shows off the American-made weapons it has seized after US and Nato troops beat a hasty retreat.

The Afghan army is collapsing across the country and the Taliban appear to be winning the propaganda war with videos to prove that they will welcome surrendering soldiers - as long as they hand over their state-of-the-art weapons and Humvee armoured cars.

The US left Bagram Airfield last week - its fortress in the country for nearly 20 years - by slipping away in the night without telling the base's new Afghan commander who discovered they had gone the next morning.

However, General Austin Scott Miller, commander of US and Nato troops in Afghanistan, said he was shocked by how quickly the Afghan National Army had surrendered to the Taliban.

'I don't like leaving friends in need,' he told ABC on Monday. 'We should be concerned. The loss of terrain and the rapidity of that loss of terrain has to be concerning. You look at the security situation, it's not good.

'The Taliban are on the move. War is physical, but it's also got a psychological or moral component, and hope actually matters. What you don't want to have happen is that the people lose hope.'

More than a thousand Afghan National Army soldiers fled into Tajikistan from the northern province of Badkhshan following clashes with the Taliban on Sunday.

Tajikistan said that the Afghans were allowed to enter on the principle of 'good neighbourliness' but called up 20,000 reservists to bolster its border guard and prevent further flooding of the frontier.