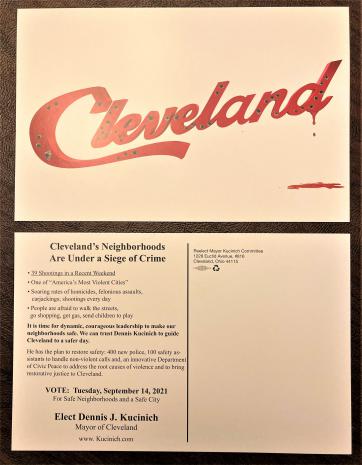 "The image is disturbing."

Those are the words of Cleveland mayoral candidate Dennis Kucinich regarding the picture used in his latest campaign effort that depicts one of the iconic Cleveland script signs dripping with blood and riddled with bullet holes.

His team is calling it "a disquieting piece of direct mail" and "an honest illustration of Cleveland today" while urging voters to cast their ballot for Kucinich on Sept. 14.

"It is time for dynamic, courageous leadership to make our neighborhoods safe," the mailer declares. "We can trust Dennis Kucinich to guide Cleveland to a safer day."

Kucinich added: "City officials and candidates who are not paying attention and ignoring this crisis don't understand what's going on or what to do about it. Every other positive thing we want to do in this city depends, first and foremost, on making Cleveland a safer city."

After news of the mailer surfaced, 3News' Brandon Simmons received the following statement from David Gilbert, the president and CEO of Destination Cleveland: