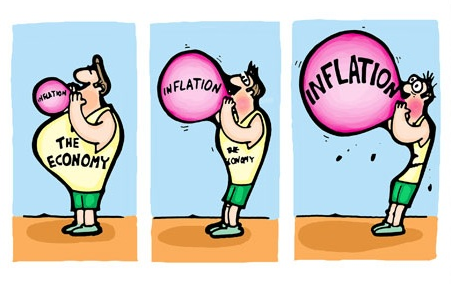 When the crash comes, the stagflation of the 1970s will be combined with the spiraling debt crises of the post-2008 era, leaving major central banks in an impossible position.

In April, I warned that today's extremely loose monetary and fiscal policies, when combined with a number of negative supply shocks, could result in 1970s-style stagflation (high inflation alongside a recession). In fact, the risk today is even bigger than it was then.

After all, debt ratios in advanced economies and most emerging markets were much lower in the 1970s, which is why stagflation has not been associated with debt crises historically. If anything, unexpected inflation in the 1970s wiped out the real value of nominal debts at fixed rates, thus reducing many advanced economies' public-debt burdens.

Conversely, during the 2007-08 financial crisis, high debt ratios (private and public) caused a severe debt crisis – as housing bubbles burst – but the ensuing recession led to low inflation, if not outright deflation. Owing to the credit crunch, there was a macro shock to aggregate demand, whereas the risks today are on the supply side.

We are thus left with the worst of both the stagflationary 1970s and the 2007-10 period. Debt ratios are much higher than in the 1970s, and a mix of loose economic policies and negative supply shocks threatens to fuel inflation rather than deflation, setting the stage for the mother of stagflationary debt crises over the next few years.