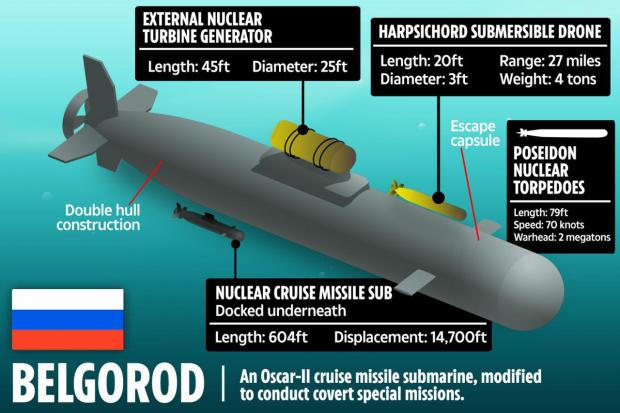 Estimated at 178 meters (584 feet) long and about 15 meters (49 feet) across, it's twice the size of the UK Royal Navy's largest submarines, but more impressively is equipped with AI-guided nuclear tipped underwater drones which according to one prominent Western source are capable of hitting coastal targets lying 6,000 miles away.

The Belgorod has been known about and teased by the Kremlin for years, but is now being hailed in Russian media as a "game changer".

One military expert with the Royal United Services Institute (RUSI), Dr. Sidharth Kaushal, explained to The Mail on Sunday:

"The Belgorod is large enough to act as a mother ship for a unique set of smaller vessels which have deep-diving capabilities and the ability to tamper with undersea infrastructure.

It's well equipped for sabotage and clandestine operations. Its Poseidon nuclear torpedoes could also be a very effective means of attacking an aircraft carrier in wartime – one against which at present no defense exists."

It was designed with the advanced Poiseidon torpedoes in mind as part of Russia's broader nuclear deterrence arsenal.