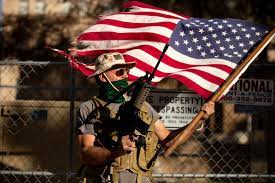 How is one to gain and keep his freedom in a country made up of apathetic and obedient fools steeped in ignorance? This is a question for the ages, but in this twenty first century, it is a life and death struggle on the edge of darkness, where light exists only in the distance, and only in the minds of the very few. The reality of this dilemma is a story about survival, so should those that understand the dire situation we face, those that have the courage to fight for their own liberty; abandon the rest of society in favor of pursuing truth and freedom without being surrounded by the chains of weakness and submission that consume most of the masses? We are currently living in an irresponsible insanity, so should the societal cord be cut? Is that the only way to escape the collective mob mentality?

The polarization of America that has been growing in strength for years, continues to escalate at an even faster pace, and of course, this has all been accomplished by design through indoctrination, fear mongering, and brainwashing. Many believed that during the last criminal political administration, it could not get any worse, but alas, each time one evil and corrupt group replaces another in this absurd political process, division and hatred continues to grow, and things always worsen.