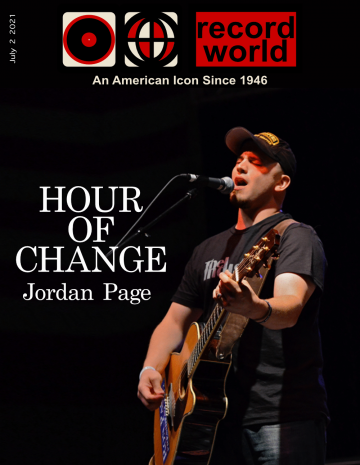 Jordan Page is a singer/songwriter, performer, freedom activist, hemp farmer, evangelist, environmental entrepreneur, and blockchain visionary. A voice of conscience and truth in a time of turmoil and deceit, Jordan is writing songs that open hearts and minds, and is working on multiple fronts to change the world.

His newest single "Hour of Change" is reminiscent of so many of the troubadours that came before him like a Jackson Browne 70s style of writing and vocals, but with the production values of bands like Mike and the Mechanics, with Bob Dylan messages. It doesn't get any better than that and the message is clear that we need to embrace the "Hour of Change" to move forward in this new normal.

Jordan's vocals are haunting, and the single doesn't make the mistake of being over-produced, relying on his talent and song to get the message across. His songs are iconic meaningful, honest, and brazen enough to draw fans from all walks of life. Every Jordan Page song is unique, and has a lasting impact on his listeners.

Watch the "Hour of Change" on YouTube Here: https://youtu.be/qHaVaCiQydk

As America struggles to find its soul and cultural divisions are tearing apart the fabric of the great experiment in liberty, Jordan Page is a voice singing in the wilderness. Bursting onto the national scene in 2012 with songs of freedom decrying war and corruption, Jordan Page found himself trading in gigs at local bars for massive rallies, stadiums, and news broadcasts as he became a staple of the Ron Paul presidential campaign and the liberty movement that drove it.

His poetic lyrics reflect the times with a style that is both current and timeless, driven by powerhouse rock and roll mixed with classic folk and hints of country music. Jordan has toured internationally as an independent artist, releasing 2 albums and numerous singles. He is an outspoken advocate for individual liberty, focusing on natural law, gun rights, medical freedom, anti-war initiatives, political prisoners, cannabis freedom, decentralization of government and finance, religious liberty, and jury nullification. Jordan is a dynamic performer, known for his passionate baritone voice and his vigorous guitar solos. A storyteller at heart, Jordan loves to share the meaning of his songs on stage, and seeks to connect with each crowd on a personal level, always endeavoring to create an experience where each person in his audience feels special.