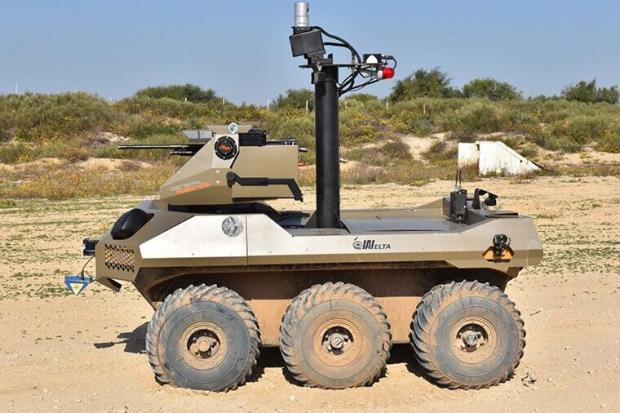 Israel Defense Forces (IDF) appear to have deployed a new semi-autonomous robotic ground tank called the Jaguar that patrols the Gaza border and removes soldiers out of harm's way from sniper attacks by Hamas and Palestinian Islamic Jihad groups.

The Jaguar military robot is on a six-wheeled chassis that is heavy-duty and highly maneuverable, equipped with a weapon station, communications and sensors. A turret is mounted on the front of the robot, firing a 7.62mm MAG machine gun that can be operated remotely.

"We have led a groundbreaking technological development – an independent robot that reduces the combat soldier's friction with the enemy and prevents risks to human life," Lt.-Col. Nathan Kuperstein, Head of Autonomy and Robotics at the IDF's Land Technology Division, said. "It even knows how to charge itself – almost like an iRobot."

The Jaguar can be used for several types of missions including, intelligence, surveillance, and armed reconnaissance.

What remains a mystery is when IDF forces deployed ground robots on the border. But this isn't the first time the country has used artificial intelligence to defend its homeland.