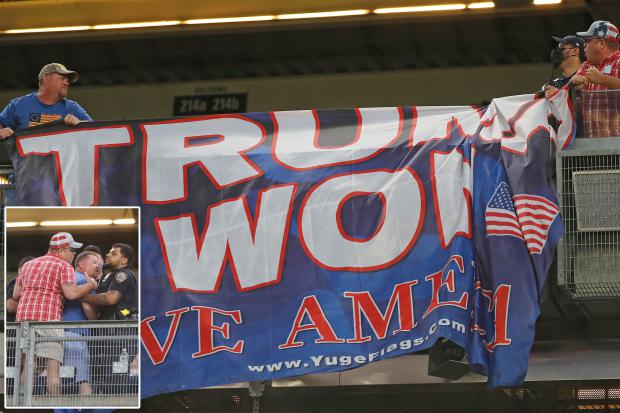 A Donald Trump supporter who refuses to accept the official results of the 2020 presidential election has been banned in all 30 Major League ballparks after being ejected for unfurling 'Trump Won' banners at several games this season.

Dion Cini, 52, has been seen hanging his banners at New York's Yankee Stadium and Citi Field, Boston's Fenway Park, and Philadelphia's Citizens Bank Park. In each instance he says he was ejected, but claims he was told he would be permitted to return.

However, Cini received a June 11 letter from Major League Baseball banning him for several recent violations of the fan code of conduct. A MLB spokesman declined to comment on the letter, but DailyMail.com has confirmed its authenticity.

Cini, a New York native, responded to his indefinite suspension by urging his Twitter followers to attend MLB games to unfurl their own 'Trump Won' banners, which he happens to sell online. Previously, Cini was reportedly banned at Disney World for holding up a 'Trump 2020' sign on a ride.

'Mr. Cini,' read the letter that he posted on Twitter. 'During the course of the past several weeks, you entered Major League Baseball stadiums in New York, Boston, and Philadelphia for the purpose of conducting 'flag drops.'

'This activity is prohibited at each of these stadiums, and your fan code of conduct violations resulted in your ejection from each of them. A review of your public statements indicates that you intend to continue this behavior at other Major League Baseball stadiums, and that you are encouraging others to conduct themselves likewise.