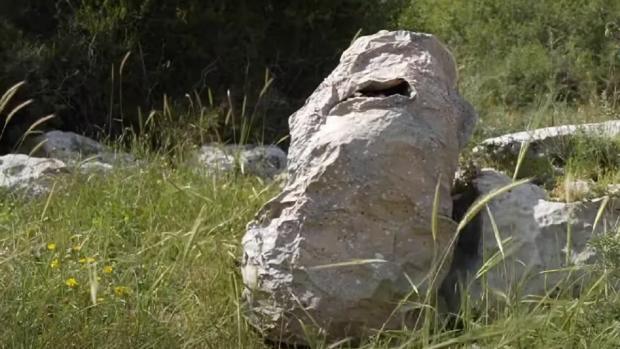 Developed in partnership with Israel's Ministry of Defense (MoD), the Kit 300 sheet is made of thermal visual concealment (TVC) material that combines microfibers, metals and polymers to make soldiers harder to see with the human eye and thermal cameras.

The sheet weighs just 1.1 pounds, allowing soldiers to easily roll it up and carry it while trekking through dangerous war zones.

Soldiers wrap it around themselves when on the move and join their sheets together to build a barrier that resembles rock when they set up a position.

'Someone staring at them with binoculars from afar will not see soldiers,' Gal Harari, the head of the detectors and imaging technology branch of the MoD's research and development unit, said in a statement.

The Kit 300 aims to reinvent the traditional camouflage gear that has gone nearly unchanged.

'Camouflage nets haven't changed too much in the past 50 years,' Yonatan Pinkas, director of marketing at Polaris Solutions, told The Media Line. 'We wanted to bring in a new type of material,' he added. 'So TVC was born.'

The Kit 300 is double sided, each with its own colorization to blend into the battlefield.

One side is to be used when in dense vegetation and the other is designed for more desert-like areas.

However, the company will customize patterns and coloring based on need.

The Kit 300 is also waterproof and can provide military personnel with shelter. that can stand like a small tent.

Although the material is lightweight, it is sturdy enough to mold into three-dimensional shapes and can be used as a stretcher to carry wounded soldiers.