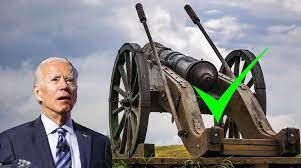 Oh, Joe, all the things you don't know! Your claims are factually inaccurate; Internet patriots should censor these particular ones as dismisinfoganda. Other fact checkers have already pilloried your ignorance of these matters! You, or at least your speechwriters, should read a book, literally my One Nation Under Debt (McGraw Hill 2008). In it, and the copious sources cited therein, you will find that private individuals could, and did:

form their own military units, usually termed "Legions," that included artillery units. That of Charles Dabney of Virginia is discussed in my book based on primary source research that I conducted at the Virginia Museum of History and Culture and military histories include plenty of other examples.